Women and Imposter Syndrome in the Workplace 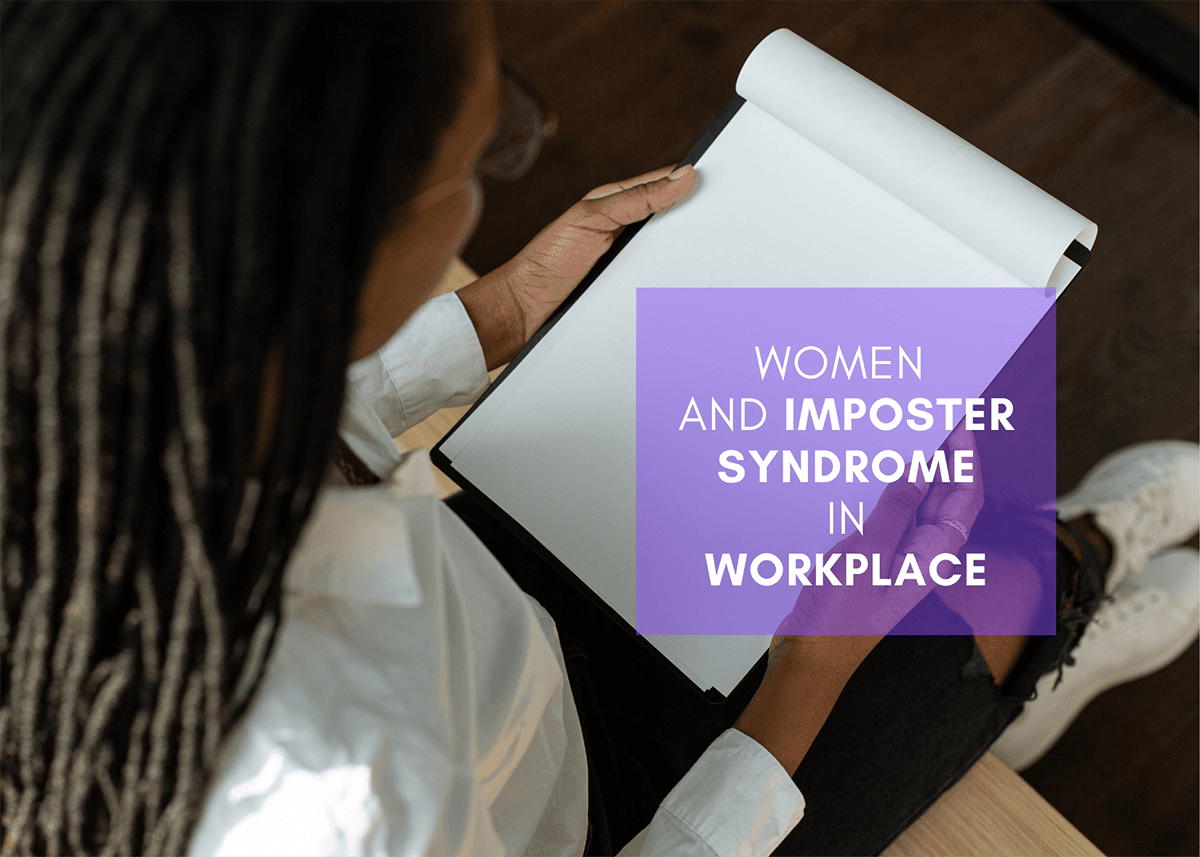 You’ve probably heard of Sheryl Sandberg, Facebook’s CEO. Or Penélope Cruz and Lupita Nyong’o, famous actresses. They all seem like incredibly successful and talented women, so full of confidence, don’t they? It’s hard to imagine they’d ever doubt themselves and feel insecure. But it’s the truth.

All these successful women, and many more, have dealt with imposter syndrome at some point in their lives. Actually, 75% of female executives in the US confirmed experiencing this syndrome at least once.

But was it only their own inner feeling of not being skilled enough, or were there other, external factors that led to that imposter syndrome? How do we help women pinpoint the reasons why they feel insecure in the workplace and embrace their talents with confidence?

We tried to answer these questions in this article.

What Is Imposter Syndrome?

They’ll discover I’m a fraud. I don’t deserve the praise. I’m not as competent as others may believe.

These are the thoughts you may find in someone with imposter syndrome. This syndrome refers to an internal, often irrational feeling that you don’t deserve your own accomplishments, that you’re actually not as competent and smart as other people think, and that they will discover you’re a fraud soon enough.

According to Psychology Today, around 70% of people have experienced this feeling at least once in their lives. It can occur in up to 30% of adults who have actually achieved quite a lot in their lives.

The roots of this syndrome can be found in personality traits, as well as in some environmental factors during a person’s childhood and adolescence. For example, if an individual grew up under a lot of pressure coming from their parents when it came to academic accomplishments, they may struggle with perfectionism today, as well as with impostor syndrome.

The most common triggers that can cause a person to feel like a fraud are different versions of success: when they receive an award, are publicly praised, get a promotion or a scholarship, etc.

Although imposter syndrome was initially researched in high-achieving women back in the 70s, and psychologists thought it only affected women, it’s also common among successful men.

But, when it comes to women, there may be other factors that affect the appearance of this syndrome - not just their personalities.

Why Does Imposter Syndrome Occur in Women?

For centuries, women were considered second class. They didn’t have the right to go to school, educate themselves, work, earn money, own property, vote, and… should we even continue the list? It goes on to the most trivial “liberties” we enjoy today, like wearing pants.

So, when you think about it, it’s not surprising that more women than men experience impostor syndrome in the workplace. They have centuries of being considered incompetent to deal with.

We already mentioned Sheryl Sandberg in the introduction of the article. Her book called Lean In reveals some staggering statistics concerning women in the world of work. Let’s mention one as an example: women will skip a job post where they don’t meet 100% of the criteria. In contrast, men will apply for any job where they match 60% of the requirements. Who’s more competent? That’s individual. But who’s more confident? The answer is obvious.

But do we need to fix women and their insecurities only to create a level playing field for everyone?

It’s obvious that imposter syndrome has a major impact on women at work, whether they’re company owners or they work for others. The question is - why?

How do people compliment boys? Look at you, you’re so strong, you’re so smart! But what do they say to girls? You’re so pretty; look at your cute pink dress.

Boys and girls are still raised differently, where boys are encouraged to lead, show their strength, and not cry “like a little girl”. On the other hand, girls are taught to be gentle and quiet, so society imposes gender roles and stereotypes from a very young age.

It’s hard to leave years of education behind even once you grow up and understand how wrong these stereotypes are. They’re usually so internalized that one day, when a woman shows that she can be an amazing leader, she starts doubting herself and feeling like she doesn’t belong there, or that she’s undeserving of what she’s accomplished.

When a man becomes a father, rarely will you hear someone asking them how they’re planning to balance their career with caring for a newborn. However, women get asked this all the time. On the other hand, they get less than satisfactory maternal leaves, so when they choose to prolong the time with their babies, they often get comments like - well, of course, you can’t work now that you have a child.

With a bunch of unsupportive comments from everyone around them, it’s no wonder women start to question their abilities to balance motherhood and their careers. Less than three years ago, research showed that over 35% of women considered quitting their jobs after they’ve had a baby.

So, when a woman returns to work after such a life-changing event, she feels like she’s missed too much, like she can’t keep up with the new procedures, and the pressure to get back on track is almost unbearable, even if the woman is an expert in her field.

On the other hand, she feels like a bad mother for “neglecting” her child when she really isn’t doing that, which is almost always followed by the constant feeling of guilt. That’s a major contributor to feeling like an imposter in both motherhood and the workplace.

Sometimes, women simply need to say - it’s not me, it’s you. In many cases, women get gaslighted by society telling them they have impostor syndrome, when really they’re only working in an unsupportive team, a toxic company culture, and a racist or misogynist environment is holding them back.

Unfortunately, there are statistics to back up these claims.

For example, according to research from the Unconscious Bias Project:

Women are also more likely to suffer from burnout as they put in longer hours and are more likely to work overtime - because they believe they need to work harder than men to prove themselves.

Many women (around 47% of them, according to a survey) also claim that it’s less challenging for them to tackle the infamous imposter syndrome if they have their manager’s support.

Let’s dive into how employers can help their female workers and executives fight imposter syndrome and a discouraging working environment.

How Employers Can Help Women Fight Imposter Syndrome in the Workplace

If you want to support, empower, and help women on your team reach their full potential, here’s what you can do as their team leader, manager, or employer.

1. Remind Your Employees They Have What It Takes

Try to identify situations where your female employees express their doubts and start second-guessing their decisions. It’s important to remind them in these situations that their accomplishments and rewards are well-deserved and that their efforts are appreciated.

This may seem like a trivial gesture, but simply saying “thank you for your hard work” or “I appreciate how you taught others how to do this” can go a long way and boost a woman’s confidence.

Giving the women on your team a chance to communicate openly and express their concerns to someone they trust can be crucial for dealing with imposter syndrome.

An open and honest company culture will eliminate situations where women feel excluded or like something’s being kept from them. That happens a lot, especially if a woman is going on maternity leave soon - it’s not unheard of that their colleagues act as if they’d already gone even before they really leave.

Being able to communicate your needs openly is necessary for a workplace to function successfully, and staying in the know as long as you’re officially working is critical.

3. Give Individuals Their Own Space, but Promote Teamwork

Your female employees should know that they will have their own space to develop as individuals, even if they work in a team. Career opportunities should be equally available for everyone who contributes to the company, based on their skill set and results they’ve achieved, and you should remind women on your team of that fact.

However, to build a strong and likeable company culture, you should promote teamwork and make sure enough attention is paid to developing meaningful relationships between your employees. That will prevent your work environment from becoming toxic and discriminating in any sense.

4. Make Sure You Listen to Your Employees

So, when a female employee comes to you with an issue, don’t discard it as their “irrational fears and concerns”, but try to go more in-depth of the problem to really understand what’s going on. There may be a situation where you need to intervene or remind your teams of your company policy and rules.

5. Provide Training for Your Employees

Making diversity your number one priority shouldn’t stay in name only. Sometimes, people believe they know what diversity in the workplace means when they really don’t. Diversity doesn’t only mean hiring a specific number of women, or women of color, or people with disabilities. Did you know that Maureen Zappala, an engineer who spent 13 years working for NASA, thought for quite a long time that they only hired her because she was a woman?

Diversity means equity in your team - giving everyone the same chance to stand out and helping those who need additional resources and assistance.

In some cases, your employees may need additional training on different topics, including diversity, imposter syndrome, teamwork, inclusion, and more. Also, don’t forget that enabling your workers to take counselling sessions may be a good idea, especially for those whose imposter syndrome actually has to do with some childhood trauma or other causes not related to their workplace.

6. Make Sure You Address Any Signs of Bias Immediately

As the employer, manager, or team leader, you need to make your employees feel physically and psychologically safe in their workplace.

That means you need to react promptly if there’s any sign of bias in your company. Your company policy should also state that any kind of discrimination will not be tolerated, but sometimes people need a reminder.

With a proper reaction plan in place, you will make sure that the number of potential causes for women in your company to suffer from imposter syndrome is down to a minimum.

From Self-Doubt to Empowered Leadership

There’s a lot to learn from women in business.

Their leadership skills are on a pretty high level, and they promote values such as authentic communication, devoted and engaged work, and being mindful of what you do, why you do it, and who you work with.

If we stop blaming the imposter syndrome on their internal insecurities and start considering external factors that are making them doubt their abilities, the world of business can thrive even more.

If we start empowering women instead of making them question their decisions, we can learn even more about building strong company cultures and stable businesses based on meaningful human interaction and collaboration.